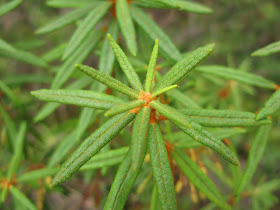 When I first started learning about medicine, I always heard about labrador tea but never really pursued it because I figured this is such a redundant medicine, everyone always talks about it so it will never be lost, I'll learn about this one later.

Elders would even make remarks like: “Oh, that tea is what we would get when we cannot afford red rose, because it tastes really good”

So, all this sort of lead me to believe or 'realize' that it is not a really significant medicine. In short, it gave me dandelion vibes.

Lets start with the utility uses.

Remember, in our traditional wisdom we teach that every plant is showing you what its good for; “the forest is our greatest teacher.” “Everything we need is outside.” All you have to do is learn how to watch the earth and you will learn everything you need to know about life. Which plants are medicine, what it is medicine for, when to pick it, how to pick it, if it has a utility use, if you can eat it, etc. 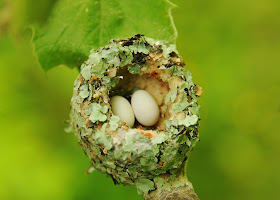 We have so much to learn.

With labrador tea, one of our teachers is Naanokshkaahns, the hummingbird. Not too long ago their population was declining rapidly. An unusual 50% mortality rate sparked some research, what made it unusual was of the 50% that died, both babies died in the nest. There was no “only the stronger of the two survived” The culprit of all these deaths and the rapid decline was a devastating mite. These mites would devour both the babies. Their next question was how and why were the other 50% were surviving, these hummingbirds must be making their nest with a deterrent. 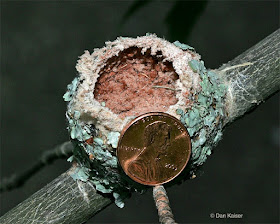 Hummingbirds make the same nest they grew up in. Whatever smells they remember from their infancy, however soft it was, all the materials their parents used, they remember. Then they make exact replicas. They survivors of this mite attack were using the rusty colored fuzz from under the labrador tea leaf for padding. This fuzz had some anti-mite qualities that would help keep the environment safe for both babies in the nest to live. They would then grow up having to make their nest with this fuzz, this would continue to happen until hummingbirds conquered the mites
completely.


When I would ask about labrador tea, everyone always said the same things; 'it tastes great, and it has brown fuzzy under the leaf, rust colored fuzz' only a few mentioned that it grows in moss.

What can we learn from this?

What else can it 'keep away'

Inuit people have a name for us woodlands people, they like to call us lice. Hahaha. We had one for them, we called them Eskimo (raw meat eaters). We do not like to be called lice, they do not like to be called raw meat eaters, we still got along and had a great relationship. I have yet to find out why we call the Haudenasaunee people The Naadwe (rattlesnakes), maybe they made boots with them? But it was probably more due to the demand of the fur trade which temporarily shattered an amazing tribal relationship by creating a contest for trapping grounds leading us to start warring each other and creating derogatory terms to call one another. Maybe. Anyways a modern term for labrador tea is naadwe tea. A lot of our people know this as Naadwe tea. The reason for this is because labrador tea is a northern plant and our Haudenasaunee brothers and sisters are our southern relatives who are an agricultural society. We used to bring them, literally, boatloads of labrador tea from the north for their grain stores. Why? If you put a handful of labrador tea in your grains it keeps mice away!

'Ojiihns' is a word that means a little pest. It is used for all sorts of bugs/flies, its in pesky animal names like 'Waabaganoojiihns', which is a mouse. I love my language, want to hear something fun: 'mskwa'waabagan' is red clay 'Waabagan' is clay, 'Ojiihns' is pest, 'waabaganojiihns' is that clay colored pest. 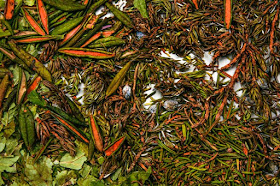 So pepper labrador tea around your camp and be wowed by the lack of little mouse poops everywhere. Or in your grains to keep them from eating your food!

The older name for labrador tea is Mshkiigabag. Which literally means swamp/bog leaf. Swamp/bog is 'Mshkiig-aki', leaf is 'bag' (pronounced 'buck'), Mshkiigabag is the swamp/bog leaf. This leaf smells fantastic, citrusy, evergreeny, fruity goodness. Its a wonder how such a delicious smelling leaf can come out of such stinky places.

The colloquial name for this plant in inuit is Kayaksi. Which means little kayak leaf (please correct me if I am wrong, this is by memory, all I remember is it means kayak-leaf.. which is super cool). When the leaves of labrador tea are dried up the edges curl and it looks just like a little kayak. This is by-far, the cutest name for a plant I have ever heard.

What I really find fascinating is how
the significance of different plants and animals change as you travel north. This is evident even in the creation stories, where down here we have the muskrat being the animal that is able to dive and get the handful of earth for the turtles back, as you go north is changes to geese. 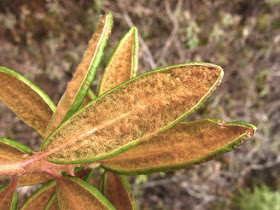 There are different plants we refer to as 'Gaagigebag' or, 'the leaf that is forever the same' Down here our Gaagigebag is Princes Pine (Chimaphila umbellata). We call princes pine this because this plant in the middle of winter is still dark green in color, you can dig it out of 2 meters of snow and ice and its still green. When you travel up north their Gaagigebag or 'leaf that is always the same' is labrador tea. They have the bogs that do not freeze, and labrador tea is able to stay in these bogs year round without changing. I think it is so interesting to observe the changes in significance.

Now lets talk for a bit about the medicinal significance of labrador tea.

Another thing I find super interesting is the fact that fasting is incorporated into ever calendar year of every ancient culture around the world. Some fasting practices, funnily enough, defy modern scientific models that show how long a human can survive without food or water. 3 minutes without air, 3 days without water, 3 weeks without food. A lot of fasting practice has people consistently fasting water for 4-7 days, even in the middle of winter!

One of the largest physiological gains from fasting is the stimulation of your immune system. Fasting cycles almost always coincide with changes of season. Changes of season always get us. In these parts the fasting occurs in the spring and fall. You normally fast just before the seasons change. This is not a coincidence either. These are in the calendar so you go into the change of seasons with an immune system that is fully stimulated and ready to quickly obliterate any invader. Labrador tea stimulates your immune system just as much as fasting does. If you want a psychotic immune system, an immune system that tears anything apart before you even actually feel sick, you need to slam some labrador tea.

Labrador tea also has some severely outstanding effects on mercury. 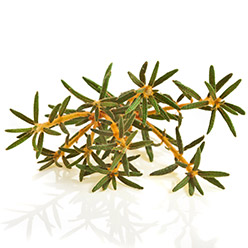 Okay, so the fact is, we do not know the long term neurotoxicity effects of mercury. What we do know is that mercury can be eliminated from all parts of your body except your brain. It gets a little clogged in your kidneys, takes some extra time to get eliminated but your brain is a different story. Organic mercury is methylmercury. Imagine it like this. Mercury is slippery, like soap in the bathwater its hard to get a hold of, but methylmercury is like soap in the bathtub but with a perfect grippy handle attached to it, easy to grab and move about. Your body is able to grab mercury by the methyl. The problem is as soon as methylmercury crosses the blood brain barrier your brain snatches the methyl, that big beautiful grippy handle and BAM, we cant move mercury, so in your brain, mercury only accumulates. This is the problem, if only we can change the brain from stealing all the methyl to giving it, then we can eliminate mercury from the brain!

Labrador tea has been in the 'culturally relevant complimentary treatment' spotlight for over a decade now. Its ability to take mercury our of your body and brain are what created this spotlight.

All of the dumping of mercury into the great lakes by the industry is to blame for mercury issues in the north. All the mercury we dump gets lifted into the air and literally rains mercury all over the north. Sorry my northern friends, its our fault.

In the north you find a huge dichotomy of people with extremely high levels of mercury and people with considerably low levels. Considerably low based on their exposure, of course. This dichotomy is precisely paralleled by the individuals level of traditional behavior. Meaning those who were regathering tradition and drinking the teas-of-old like labrador tea, had low levels. Those who still neglected tradition and these remarkable teas had absurdly high levels of mercury.

Our beautiful Akwasasne brothers and sisters are suffering a terribly unjust and overwhelming amount of mercury. It sounds like that old trade of labrador tea from the north needs to be resurrected.

Remember that 'culturally relevant complimentary treatment' spotlight I mentioned earlier. Researchers of the north wanted to find out if labrador tea can be good for anything else? Wouldn't it be nice if labrador tea can solve the epidemic of diabetes, obesity, arthritis, etc. 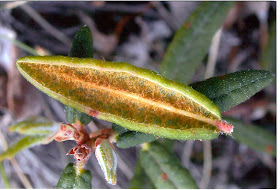 
This plant occurs in everywhere in Canada and even stays available all year. What is the interpretation? It should be a part of everyday life, in everyone's cupboards all of the time. Especially the tea cupboard (sorry RedRose). Chi-Miigwetch Mshkiigabagwaabo! 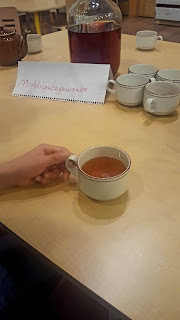